Valeriya N-Georg's Corporis Fabrica is an immersive print-based installation, in which scale and image combine to submerge viewers into a sense of their own physical self, a view from within, an experience of being both smaller and larger than themselves, of looking out from under their skin.

The work is a quest for the self within the anatomical body, for the notional mind which inhabits the body’s neural network, but is perhaps somehow other than its physical substance. It takes on birth and death, the brain and the skin, the mind and the ways thought controls life by changing the chemistry in the body. For N-Georg Science and Art are inseparable. Neurology, Psychology, Consciousness studies and Philosophy all come into play on the surfaces which she uses, which act like dissecting tables on which she explores and recreates her sense of the substances of self.

N-Georg's principal interest is Neuroscience, as a system of exploring the relationship between the human body and the embodied self. In her practice she attempts to use fragments of physical anatomy to visually represent the inexpressible experience of inhabiting a body; the boundaries between the inner and outer self; between the physical and metaphysical; tangible and intangible, the tactile and the optical. Her work is deeply influenced by sources such as Antonio Damasio’s research on the relationship between the brain and the consciousness, the role of emotions and feelings for our life-regulating processes and mental representations of our body states, or Dr. Bruce Lipton’s ideas about interactions between mind and body and the processes by which cells receive information.

N-Georg works with a range of media: drawing, printmaking, mixed media and sculpture. She combines digital production with making by hand and has developed experimental new techniques for making monotype prints, based on layered acrylic gel on boards and light box installations, which she scans, collages and manipulates digitally to create large scale digital prints.

N-Georg is a recent graduate from UAL's MA Visual Arts. She has since participated in a number of group shows, including a six months exhibition at The New York Hall of Science. Her work was acquired by the Global Eye Art Collection, who also funded an additional commission. Recently her work was included in an art and science exhibition at the Houses of Parliament called Tomorrow's Child and accompanied by lectures from medical experts on early child development. Corporis Fabrica is N-Georg's first solo show and part of the gallery's new drive to support recent graduates through curated projects one to two years after graduation. 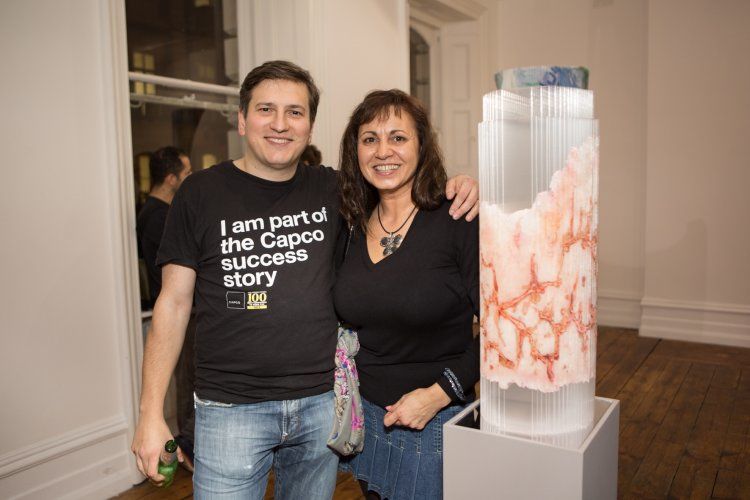